About a week ago I was at Onstage Theater in Greenbelt 1 Ayala to see Agnes of God, a brainchild of playwright John Pielmeier presented by none other than Repertory Philippines. I have received an invitation from The Ugly Writer himself in late February and it was an opportunity I could not let pass by. Talk about enjoying the perks of being a part of The Ugly Writer’s guild. 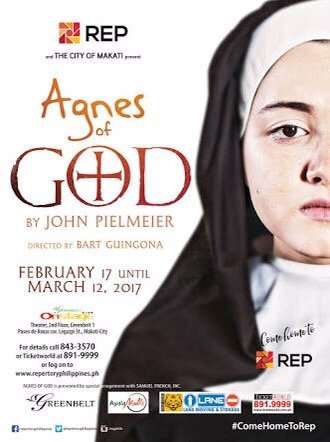 The theater is considerably small. However, the size gives it an advantage in such a way that it made me feel intimate with what I came to see, and being seated in the third row of center orchestra is another factor that made my viewing experience extra pleasurable. I love the minimalism of their stage setup. With a set of colossal curtain-like pillars for periphery and a small round table placed between a couple of wooden chairs, getting distracted by superfluous props is not a worrisome matter.

Believe me when I say I am not much of a moviegoer, and all the more assuming ‘theatergoer’ status quo is indeed a rarity. A voice-over announcing the kickoff in ten minutes builds the excitement in me. Come eight o’clock sharp, Dr. Martha Livingston played by Menchu Lauchengco-Yulo, emerges gracefully from the foggy backdrop to usher the show with a soothing monologue. And the tale proceeds with a robust audio-visual of clash between religion and reason.

The entire play is rich in emotions, as exhibited by the three main characters in the story. I have to say that Lauchengco-Yulo’s character as Dr. Martha Livingston has a commanding appeal, and she just showed us how an alpha female operates in the society. Her inquest focuses on a young nun’s psychiatric assessment which is connected to the mysterious case of an unborn baby in an unlikely place that is the convent and this element of the story is pivotal — where the other two important actresses come in.

Opposite to Menchu Lauchengco-Yulo, Pinky Amador who portrays Mother Superior Miriam Ruth evokes the overprotective ‘parent’ in all of us. Many of us are familiar with that sense of dominance we both love and hate at the same time. She goes from cooperative to defiant as the confrontation with Lauchengco-Yulo’s character thickens. Amador’s character represents how one’s faith is configured to fit the religious norm as we know it. It does not come as a surprise how she gave life to a cleric+matriarch role the play calls for.

And then there is Sister Agnes played by Becca Coates — a young nun whose sheer naivety makes the gathered pieces of evidence look far out while she maintains oblivion into the murder mystery. Being the subject of investigation puts the titular character under massive stress as it turns out that the precursor to her already existing mental anguish is her traumatic past; which then Dr. Livingston gets to uncover in the process of truth-seeking. Coates’ acting is just as superb, and pair that with her angelic singing voice made omnipresent in some parts of the play. She is truly talented.

Truth be told, we live in the era where logic and rationality are sought in every event there is. We sit down and take time to get philosophical. We clamor for and demand answers that justify how and why something came to existence. But have we asked ourselves if we could save room for a miracle? After all, we are faced by questions that are still left unsealed without any concrete answers, like how did life come about as we know it? It is interesting to take note that mutual exclusivity of faith and science can be marvelously spun together in one work of literature transformed into a theatrical release. Agnes of God is a potent thought-provoking tale for everyone, devout and skeptics alike.

The author of this stage play review wants to thank Miss Nette for the ticket logistics and her warm smile on that night.

"You left me standing still, hence I have gone cold upon your return."

ramengonecold is the proud lucky thirteenth member of The Ugly Writers, struggling to write about love and anything that can get everyone high. Will pen any situation and state of mind as they occur. Blunt and straightforward but benevolent nonetheless. INTJ. Leonine. Turophile. Sapporo-style ramen fan. An Oxford comma user with no regrets.