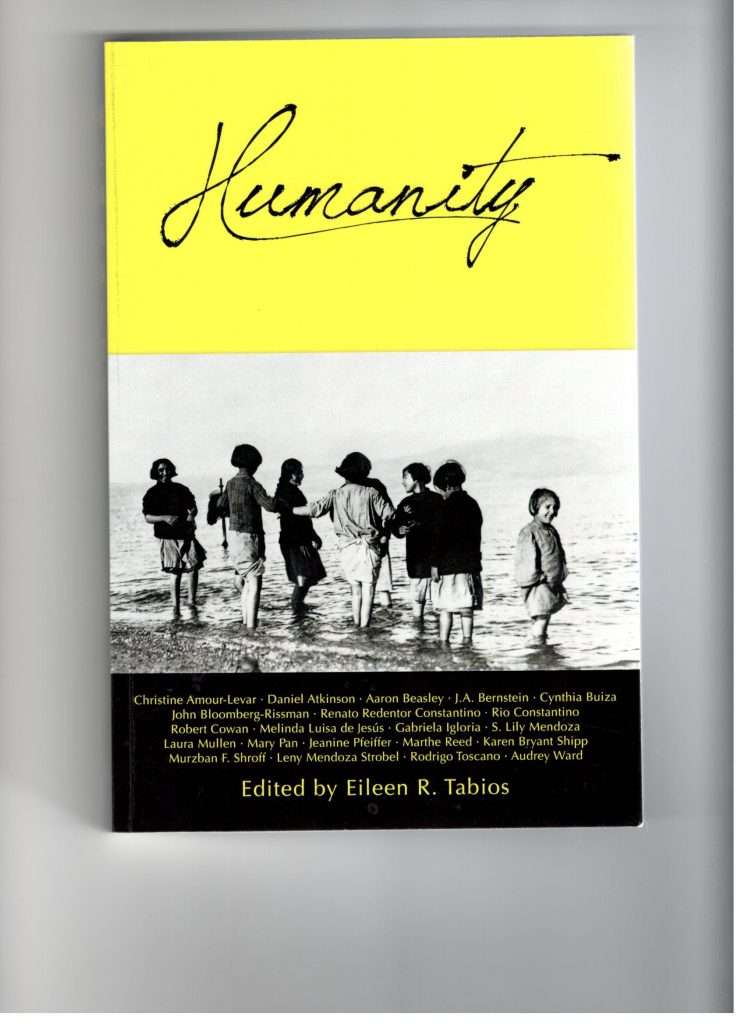 As I write this review more than a million school children all over the world, following the example set by the Swedish schoolgirl, Greta Thunberg, are staging protests to call for urgent action to combat climate change. Here in Edinburgh and also in London, a group calling themselves Extinction Rebellion are doing the same thing. They are doing it to wake up a critically unengaged public ruled by politicians who cannot think beyond their own short-term goals. They are doing it for the sake of humanity.

In Humanity: An Anthology we are presented with a number of challenges that we, as individuals, have to face and find a way through. It is called life and it comes in a variety of contexts: from Africa and the Middle East, Siberia and the Arctic Circle, America and the Philippines. A variety of issues are enumerated: inequality, moral blindness, climate change and sustainability, human and animal rights, conflict between nation states, prejudice and intolerance, the #me two movement. Some of these stem from our willful collective ignorance of history and culture, our selfish urge to live in the moment without regard to the lessons of the past or the need to lay a firm foundation for the future. In some ways the book is about our inhumanity (man’s inhumanity to man) but in others it is about our humanity – those innumerable acts of kindness that often go unnoticed but mean so much to many.

The title evokes compassion. It embraces people in general, an understanding and kindness towards others and what it means to be human. The cover image of Greek and Armenian refugee children in the sea near Marathon, Greece, c. 1915 is a reminder of war and its terrible consequences. It is a reminder that lessons never seem to be fully learned. There is an echo here from the past. The battle of Marathon, a watershed in the Greco-Persian wars, has often been seen as a pivotal moment in Mediterranean and European history. Fast forward to the present, and the refugee crisis is all around us once again.  These are the casualties of war.

The book was conceived by Aileen Cassinetto who in turn was inspired by Annie Dillard’s book For The Time Being which, “in large part contemplates humanity ‘in a world of almost 7 billion individuals,’” Cassinetto holds the belief that “any one person can change the world” but opted for some experts views along the way. Eileen Tabios accepted her request to step in as editor, to seek out further contributors and to see the project to its conclusion.

The range of contributors is impressive. They include an ethnoecologist, a physician, a clergywoman, a high-school student, an ethnographer, a professor of literature, poets and environmental advocates. They come from a number of different cultural backgrounds and the diversity of their contributions provides us with a rich source of intellectual debate. For these are conversations that need to be continued and should be returned to long after the book has been read.

In this collection we catch a glimpse of the strength and fragility of the human race, our insensitivity and vulnerability, our hopes fears. Mary Pan’s essay Dust gives us a stark account of poverty in rural East Africa as she works tirelessly to save lives in an appallingly ill-equipped intensive care unit, operating theatre and other makeshift facilities. It reads like the situation reports that are filed in Dispatches, the news bulletin of Médecins Sans Frontières. The same story could be replicated many times over in South Sudan, Bangladesh, Iraq, Syria and Yemen.

In 360°C Below Zero, Christine Amour-Levar takes us on an endurance test as she braves  freezing temperatures to accompany the Nenets on a stretch of their epic yearly migration with their reindeer herds across the frozen gulf of Ob in northern Russia. She is one of a team of nine women from Singapore, Dubai, London and Kuala Lumpur who are raising awareness and funds for women survivors of war. By trekking in such harsh conditions they hope to inspire women to leave their comfort zone for a certain period of time to push their limits in an effort to rally support for a worthy cause and to stand in solidarity with those most in need. Going to the ends of the world to help others should be an inspiration for us all.

For me, S Lily Mendoza’s essay, Composting Civilization’s Grief: Life, Love and Learning in a Time of Eco-Apocalypse, is seminal to the whole book. It is a salutary lesson that reaches back into the distant past to show us where and why, in the name of civilization, we have gone astray. She sums up her very erudite and informative essay with these words: “We’re not here for long, we’re only here for a short while, so let’s commit what’s left of our lives to hearing more the cry of Wild Earth who is truly our home, the Holy in Nature….Siyanawa. May it be.”

In A Poetics of Ghosting, Rodrigo Toscano engages in conversation with Aaron Beasley on the subject of the poet’s responsibility as a citizen of the world – poets as social activists, poets as game-changers, poets who test the waters to give an account of where we are at. It includes a call for poets to “test” language more, to be more experimental (think of Shakespeare and how he pushed lexical boundaries). Retrenchment should not be the order of the day. That only “seems to invite deep fatigue and empty antagonisms.”  Instead, poets should search for a more effective way to practice poetry. Ghosting historical experience is an important part of that search. Eileen Tabios presents her own view, when she questions poetry’s sufficiency, to explore, question and engage with complex, global issues of central importance to us all, and frames it in the context of an exchange of views with John Bloomberg-Rissman. For Tabios, “the arduity of poetry…is figuring out to live as a responsible human being…”

Modes of belief are a recurrent theme in this book. In her essay, Coyote at the Crossroads, Karen Bryant Shipp warns against monotheism which she sees as fertile ground for intolerance which in turn can lead to fundamentalism and exclusion: if I am right, then everyone else must be wrong.

Despite the world trying to beat us all into conformity and submission, there is much in this book that is positive.  Aubrey Ward, in her essay A Miniature Study in Humanity stresses the importance of engaging children in conversation, of transmitting oral traditions that teach of compassion and respect between generations. It is another way to care for and protect our children. Renato Redentor Constantino in his essay Detours has this to say:

As the world turns and fortunes stir, there’s always a table full of inevitability somewhere waiting to be upended.

As activists, it’s part of a batch of truths my wife and I have tried to hand down to our kids.

Own up to screw-ups whenever you can; be sorry.

What is so striking about this collection of essays, whether it be Cynthia Buiza’s beautifully atmospheric account of her relationship with urban living or Leny Mendoza Strobel’s passionate plea for indigenous cultural revival in the midst of a global capitalist culture,  is the intensity and urgency with which each writer conveys his / her subject matter. The total commitment that they give to their vision for a better world, a world that is radically different from the one we find ourselves in today, is not only impressive but also urgent. It is a call we ignore at our peril.

The title suggests that a further volume or series of volumes will follow. Social media, the death of our inner cities, water deprivation, robotics, globalization, protectionism and the rise of nationalism are surely contenders for future debate.

Neil Leadbeater is an author, essayist, poet and critic living in Edinburgh, Scotland. His short stories, articles and poems have been published widely in anthologies and journals both at home and abroad. His publications include Librettos for the Black Madonna (White Adder Press, 2011); The Worcester Fragments (Original Plus, 2013); The Loveliest Vein of Our Lives (Poetry Space, 2014), Finding the River Horse (Littoral Press, 2017) and Punching Cork Stoppers (Original Plus, 2018). His work has been translated into several languages.