Before His Time is a short story written by Jimmy Boom Semtex and shared with The Ugly Writers under the theme One Step Forward Two Steps Back for the month of August.

Before His Time (based on a real event) 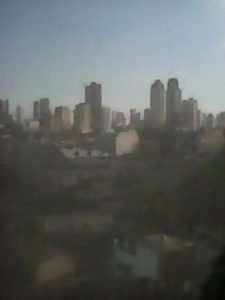 Certain people should never ever meet. For example the psychopath who enjoyed killing people and the daily commuter off to work by train. What happens when these two meet? Nothing at all if the mad man has no opportunity. But he’ll make it happen for this is the day! He just knows it. Killer on the loose!

A man thrown off a train, the door opened and bam, out he goes! The mad man is thrilled. He did it, murdered another innocent person. Down and over the track bounces the now dead man, his head bashed in and limbs snapped like matchwood. Humans aren’t designed to fall out of ninety miles per hour trains.

The innocent man was called Egg Head and his murderer was called Bicycle Bum. The funny names don’t take away the seriousness of the situation. Egg Head is the tenth who the serial killer had killed. It went like this.

The day started out like any other day in boring Nottingham. Nothing much was happening except a boring tennis event for boring people who liked this boring sport. There was also a boring covers band playing Justin Beiber and One Direction songs. Out on a park bench slept a bored goth guy because he couldn’t get a hotel as all the tennis fans occupied them. What a boring city! Even the people on the way to work looked bored.

Egg Head was on his way to work and he was bored. His job was boring and so was his commute. A boring train ride. He listened to his personal stereo and nodded his head in time to Depeche Mode. They were his favourite band. Definitely not boring. I look forward to see them live at Nottingham Rock City again. Their last gig was awesome!

He was stood by the corridor on the train and it was full. Hundreds of equally bored commuters going to their boring jobs; all dressed in long coats, in suits, long dresses and all looked glum. But it was fine for Egg Head had his music on and it was maxed out. A woman wearing a gray trouser suit pushed past him. She glared at him and never even excused herself. Egg Head wouldn’t have heard her but he’d have seen her lips move. He blanked her and continued to stare out of the window. The bleak winter landscape was as boring as it looked; empty fields and leafless trees but no snow.

Another person barged on by Egg Head, a city worker in his twenties. Those types were nothing but trouble. He shook his head and almost said something but that would ruin his day, so he used his elbows to give fat man next to him a nudge and moved to a different spot. This was down by the door at the end of the aisle, right at the rear of the train. The thick crowd of people became less and less till there was only Egg Head. When the train reached the central station, it was a long walk to the Entrance. Egg Head changed tapes and enjoyed Depeche Mode. I prefer it here, there’s no rude people pushing past me.

Bicycle Bum slowly made his way to the back of the train. He took his time and smiled and asked permission to pass down the crowded train. The carriages were chocker, every seat taken and every aisle full. Even if he wanted to rush, he couldn’t but that was fine. A killer needed time to pick both his victim and also the location. It needed to be right.

The lady in the gray suit waiting to use the toilet looks an easy victim, all innocent and inexperienced. The situation is wrong though. I need one who’s alone. Unless I get her when she leaves the station but I think she will leave alone. Not meet anyone. There will be more suitable victims.

Down six long packed carriages till he hit the seventh. This was less packed and almost empty at the end. And there, there was one man alone! A person wearing a blue anorak with black trousers and shoes. His hair was brown and partly covered by a cap with a band logo on it. Bicycle Bum muttered, “I’ve got you. I’ve waited a long time for you my friend.”

Egg Head was oblivious to Bicycle Bum’s arrival; his eyes were closed and he nodded head to his music. Bicycle Bum saw his victim had headphones on and heard the tinny rasp of the loud music. This guy is on another planet, really plugged in. Time to unplug him!

The train corridor ran the length of the carriage and was divided into three smaller corridors by two self closing doors. To the right were individual seating areas where passengers could relax in privacy. The first six seating rooms were full of people but the final three were empty. The right place for a crime!

He reached Egg Head by the door at the very end of the carriage. It opened out onto the track where there was a drop of five feet from the speeding train. The train was continuously in motion and his victim was leant against the window with his feet and arms braced against the sides. Bicycle Bum used his own limbs to remain upright.

Bicycle Bum watched his victim and kept his eyes open. There was only they in the corridor; it was now or never! He pushed the stereo man to the closed outer carriage door while triggering the spring loaded handle. The door popped open, outwards, and out fell the man. His arms and legs flailed like a swimmer out of his depth. His mouth was a wide ‘O’ and his scream was heard even over the loud diesel engine and click clack of the tracks. Fast as anything he yanked the door closed and left the crime scene, joining the other busy commuters. He’d just committed the perfect murder!