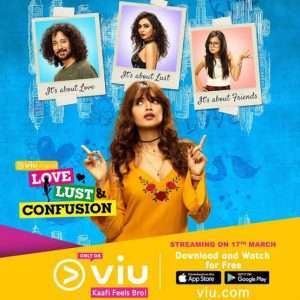 Save your data packets!
Love, Lust and Confusion as a whole is a comedy of errors and a coming of age story – with a gamut of confusions and perplexities, love and desires, choices and dilemmas mixed with an ensemble of lovable characters that depict today’s confused selves of the millennialism. Revolving around the life of a young girl Poroma Sarkar, Love Lust and Confusion is the perfect depiction of the age of indecisiveness, age of physical exploration and the age of confusion. The show also explores the element of polyandry (a now trending concept in Bollywood) and depicts the perspective of youngsters towards it. The premise sets the stage for two people who meet each other at crossroads of their lives followed by a series of misadventures involving themselves and others.

My statement?
Well directed and truly efficient cast out did the overrated story. Actors have done some honesty with their characters but the characters in the very first place were utterly unreal, viewers can start feeling the distance from reality, since the very beginning of the series.

The protagonist’s secret wishlist seems like an overused concept due to lack of story and overflowing funds of the production team. And in the process of fulfilling those desires, she becomes so offhand that it’s okay to cheat on your fiancé for fun sake. There’s no point in watching this series unless you’re a diehard fan of one of its casts, which was exactly why I watched it!

Devoted to English Language and Literature)
And many more. Her
research paper 'Voicing of perspective through creativity – an in-
depth analysis of Devika Das’s works'. has been published by 'The Expression: An International Multidisciplinary e-
Journal', ISSN: 2395-4132 (Online)| A Peer-Reviewed Journal |
Impact Factor: 3.9. She's the only undergraduate student to be
considered for a research paper publication by the journal so far.