The Slowest 5K in History

I have vowed two things: to never be unfaithful to my wife, and to never run a 5K.

Today was Lola’s Half Marathon in Waconia. This year’s race was supposed to be special for me since I am now a personal trainer at Safari Island Community Center in Waconia, and I know a number of the great people who live here.

I get special permission from the race director to start the race an hour early as a walker. This handicap allows me to finish the race with what would be my running peers who work hard to finish a half marathon under 2:20.

Since I am the only person who starts the race an hour early, I always lead the race for the first six miles until everyone else catches up to me. This year was no exception. The first two guys who passed me told me that the race was changed to a 5K due to the forecasted rain and possible thunderstorms. One guy said, that he didn’t travel an hour just to run a 5K, so he was doing the full half marathon anyway. Exactly! I ran the 1997 California International Marathon in Sacramento during El Nino where it poured from start to finish, so a little rain didn’t bother me either. I trained hard to prepare for this race, so I was in it for the long haul.

This year was an exceptionally tough year to train in Minnesota. (See my post “Another Spring Morning in Minnesota” below to get an idea of what I am talking about.)

I was thankful that they disassembled the official time clock by the time I arrived at the finish line. So, I did not get an official time for the 5K. Therefore, I survived the day without committing the unpardonable sin. My unofficial time was 3 hours and 19 minutes; not bad for a walking half marathon, but probably the slowest 5K in history. 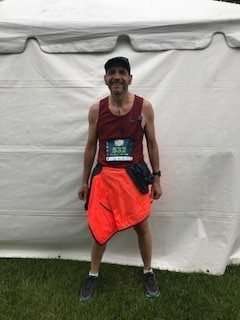 Another Spring Morning in Minnesota

Birds chirping, flowers blooming, kids playing outdoors. Not today! Instead I was greeted with a couple of inches of snow for my morning training walk. No problem: “The show must go on”, “No guts, no glory”, “No test, no testimony”, or something like that. Anyway, I have my thoughts and my tunes with me as I begin my trek from Life Time Crosstown to The Depot coffee house.

At 6:15 A.M. except for a squirrel or rabbit, the Bionic Man, a perpetual early riser, is your trail blazer to cut a path as I trudge through the virgin snow on the LRT path to Hopkins. Maybe this will be the day that I throw in the towel early and do the “smart” thing by calling my wife at The Depot to pick me up rather than brave the elements back. Nah – besides I don’t have my cell phone with me.

As I approach Excelsior Boulevard I can see that the Hopkins residents must have prayed that the spring snow would bypass them because I don’t see much snow on the other side of the path. Apparently, they didn’t pray hard enough though because I was greeted by a sheet of ice as I hit the Hopkins side of the trail. At least I had a chance to practice my balance and skating skills for the next ¾ mile until I reached The Depot.

(Actually, there was nothing supernatural about this phenomenon because the trail changes from crushed rock to asphalt in Hopkins, and asphalt is more conducive to ice buildup then crushed rock.)

Today I earned my midway cup of coffee and oatmeal cranberry chia cookie. The way back was much easier due to a slight tail wind and that a few other crazies had hit the trail after me making my footing and traction easier on the back nine.

As I drive home several hours later the sun has risen and most of the snow on the road has melted, and no one knows or cares that a bionic trail blazer cut a path in the snow on the LRT path to Hopkins that day. But 19,000 steps later, I feel great, and I am so glad that I didn’t have my cell phone with me.

Michael is a certified personal trainer through the National Academy of Sports Medicine (NASM) and a Board-Certified Health and Wellness Coach. He also has NASM certifications in corrective exercise, sports performance, and behavior change. He has senior fitness specialty and group fitness certifications through the National Exercise Trainers Association (NETA), and a functional aging and brain health certifications through the Functional Aging Institute. Michael earned a master’s degree in human resources development from the University of St. Thomas, and works with people to integrate their fitness goals with their life goals. Michael has been active in various forms of group fitness and distance running for 30 years. He has completed 15 marathons and 60 half marathons. He is eager to share his knowledge and passion for health and fitness with others.