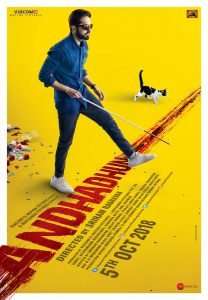 Meaningful story
The Crime thriller, Andhadhun (2018) is about a series of mysterious events that change the life of a blind pianist who now must report a crime that was actually witnessed by him (because he wasn’t visually impaired). The story of ‘Andhadhun’ is inspired by the French short film L’ACCORDEUR (writer and director: Olivier Treiner). However, a lot of changes have been done which are praiseworthy.

The suspense is nail-biting, but Andhadhun makes you laugh even during its most tense moments with its dark humour, which comes out beautifully and that helps the film from becoming too gory or disturbing.

Everything in Raghavan’s story (written with a team of writers) is there for a reason, even the opening scene of a rabbit being chased through cabbage fields by a hunter.

As crisp as the first half is, the only problem with AndhaDhun is that in the second half it stretches itself a bit too much. It suddenly decides to give its characters a lasting journey, hampering the story’s elasticity and adding tiresome repetition to a film that is already 139-minute long. In fact, the first and second halves seem like two different stories altogether. The climax is interesting; it’s worth watching out for the final scene!
A review by Sukanya Basu Mallik

Sukanya Basu Mallik is a multi-genre author, film and book critic. She has been published in various journals, magazines, and anthologies nationally and internationally including Reader’s Digest, Times Of India,Sahitya Akademi Bimonthly Journal, Lucidity Int. Poetry Journal, SEAL (South East Asian Literature) festival anthologies and AIPF Int. Anthology (Austin International Poetry Festival). She has also received a number of awards; The Best Manuscript Awards for fiction & non-fiction categories (Mumbai Literature Festival 2018)etc. Her short story ‘Healing of wounds’ has been awarded a certificate of merit by National Children’s Literature Festival led by eminent author, Ruskin Bond. Her latest releases include Mocktail and#Metoo. Her movie reviews have been published in various newspapers and journals of repute like 'Just film' magazine, Different truths, 'Creation and Criticism' ISSN: 2455-9687 (A Quarterly International Peer-reviewed Refereed e-Journal Devoted to English Language and Literature) And many more. Her research paper 'Voicing of perspective through creativity – an in- depth analysis of Devika Das’s works'. has been published by 'The Expression: An International Multidisciplinary e- Journal', ISSN: 2395-4132 (Online)| A Peer-Reviewed Journal | Impact Factor: 3.9. She's the only undergraduate student to be considered for a research paper publication by the journal so far.
Articles: 6