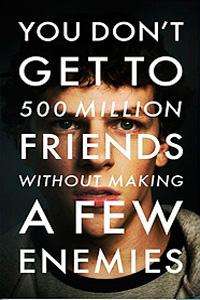 Just so perfect
Gage: Mr. Zuckerberg, do I have your full attention?

Mark Zuckerberg: (stares out the window)No.

Gage: Do you think I deserve it?

Mark Zuckerberg: (looks at Gage) What?

Gage: Do you think I deserve your full attention?

Mark Zuckerberg: I had to swear an oath before we began this deposition, and I don’t want to perjure myself, so I have a legal obligation to say no.

Gage: Okay – no. You don’t think I deserve your attention.

Mark Zuckerberg: I think if your clients want to sit on my shoulders and call themselves tall, they have the right to give it a try – but there’s no requirement that I enjoy sitting here listening to people lie. You have part of my attention – you have the minimum amount. The rest of my attention is back at the offices of Facebook, where my colleagues and I are doing things that no one in this room, including and especially your clients, are intellectually or creatively capable of doing. (pauses)

Mark Zuckerberg: Did I adequately answer your condescending question?

The plot follows- as Harvard student Mark Zuckerberg creates the social networking site that would become known as Facebook, he was sued by the twins who claimed he stole their idea and by the co-founder who was later squeezed out of the business.

Who would have thought this was the history of Facebook? well – could be partly fictional and yet I must admit, ’twas much different from the other #socialnetwork themed movies I’ve watched so far. The director did an amazing job here as did the main cast. The music by Trent Reznor and Atticus Ross set the tone perfectly. The dialogues, the cool that our young Zuckerberg played, just everything about this movie fell in place to make it a hit! I’m sure facebook will be around for a long time, so too will the legacies of this movie. Or else why would people be watching a movie post almost a decade of its release!

A review by Sukanya Basu Mallik

Devoted to English Language and Literature)
And many more. Her
research paper 'Voicing of perspective through creativity – an in-
depth analysis of Devika Das’s works'. has been published by 'The Expression: An International Multidisciplinary e-
Journal', ISSN: 2395-4132 (Online)| A Peer-Reviewed Journal |
Impact Factor: 3.9. She's the only undergraduate student to be
considered for a research paper publication by the journal so far.