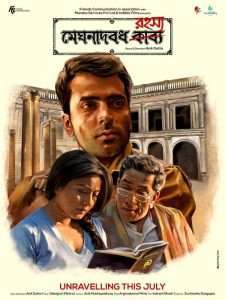 Meghnadbodh Rohoshyo (2017) is about a Professor of Oxford, who during his annual sojourn to home town receives a copy of the bengali classic from an anonymous source and wonders “whodunit, howdunit and most importantly whydonit”?

A beautifully twisted plot with wonderful concept and storytelling that slowly peels the onion and makes way for the bulb!

Meghnadbodh Kabyo isn’t exactly what the Film is about however it’s similar when we look at the characters of the film and that of the book. It’s a story of betrayal. The film was good overall, however the only point of dissatisfaction is that the policemen were portrayed as extremely hopeless and on the other hand a woman (artistic in nature) and a film director turned out to be the actual detectives of this plot. And even though that seems amusing, it didn’t quite make sense to me while I was watching the film. Overall a nice plot, good use of Bengali literature, great acting – a film worth watching!

Sukanya Basu Mallik is a multi-genre author, film and book critic. She has been published in various journals, magazines, and anthologies nationally and internationally including Reader’s Digest, Times Of India,Sahitya Akademi Bimonthly Journal, Lucidity Int. Poetry Journal, SEAL (South East Asian Literature) festival anthologies and AIPF Int. Anthology (Austin International Poetry Festival). She has also received a number of awards; The Best Manuscript Awards for fiction & non-fiction categories (Mumbai Literature Festival 2018)etc. Her short story ‘Healing of wounds’ has been awarded a certificate of merit by National Children’s Literature Festival led by eminent author, Ruskin Bond. Her latest releases include Mocktail and#Metoo. Her movie reviews have been published in various newspapers and journals of repute like 'Just film' magazine, Different truths, 'Creation and Criticism' ISSN: 2455-9687 (A Quarterly International Peer-reviewed Refereed e-Journal Devoted to English Language and Literature) And many more. Her research paper 'Voicing of perspective through creativity – an in- depth analysis of Devika Das’s works'. has been published by 'The Expression: An International Multidisciplinary e- Journal', ISSN: 2395-4132 (Online)| A Peer-Reviewed Journal | Impact Factor: 3.9. She's the only undergraduate student to be considered for a research paper publication by the journal so far.
Articles: 6