The set consists of two juxtaposed areas partitioned by a wooden door. On the left side is the operating theater better known as the titular next room where the subject apparatus, referred to as the machine, is housed. Opposite to it is the Givings’ fancily adorned parlor where drama, laughter, and little aggression among the personages take place.

Sabrina Daldry (Caisa Borromeo) together with her spouse Mister Daldry (Hans Eckstein), seek medical attention from Doctor Givings (Joshua Spafford) who runs a home-based private medical practice with the assistance of Annie (Tami Monsod), a midwife. There they meet Catherine Givings (Giannina Ocampo), the doctor’s wife constantly lamenting over her lactation inadequacy for infant Leticia who is then attended by a wet nurse named Elizabeth (Carra Barredo). Doctor Givings administers a considerably invasive treatment by using electric vibrator to induce paroxysms or orgasms by any other name, to his “troubled” patients Missus Daldry and Leo Irving (Jef Flores) which is believed to nix their “hysteria” as evidenced by irritation to light and cold.

The prying wives had me in stitches for certain. Giannina Ocampo as Catherine Givings exhibited straight comedy with her utterly inquisitive demeanor and spontaneity in thinking aloud. The best part about her character was to see her transition from a frustrated mother+wife into a woman of emancipation. Caisa Borromeo as Sabrina Daldry was charming in her own way as she naughtily cooperated with Catherine to further harness the “therapeutic” effects of the vibrator, despite her regular appointments with Doctor Givings. To see and hear her groan and writhe onstage was a delight in an inexplicably sadistic way and I humbly ask for forgiveness. She’s a pro, no doubt.

Hans Eckstein as Mister Daldry had the least airtime but that’s not to say he did not impress the audience. How does a man dare make advances in someone else’s living room? Ask him, err, his character. Tami Monsod as Annie and Cara Barredo as Elizabeth were more than helpful not just as mere personages but as women who represented the dignified working sector. Jef Flores as Leo Irving was a romantic bachelor with a whole slew of ideas and feelings all colorful enough to materialize into tangible art. And of course, Joshua Spafford as Doctor Givings was stellar all throughout the play. He was so compelling that no one in the audience would forget for a moment that he was a duty-bound doctor despite the absence of a white coat and stethoscope ensemble. My heart helplessly sank as he unfurled into a husband who gained enlightenment and passion thereafter.

Directed by Chris Millado, In The Next Room is a play showing how married women back in the day dealt with social suppression in terms of not being able to openly engage in a healthy discussion about sex and love intertwined, and how they lacked the necessary reference. Male dominance was the norm; their judgment alone was enough to bring women to an emotional affliction. It makes sense not to rule out stress, hence the perceived hysteria. Marital issues stemming from compromised attention and unexplored intimacy are still today’s common quandary and our society is hanging in a struggle. Despite all these, INTR is here to remind us that there is always the next room ― room for improvement, or recovery room. Do not overthink this. You get the drift. Packed with emotions and the necessary aesthetics, this is a comedy I take seriously. 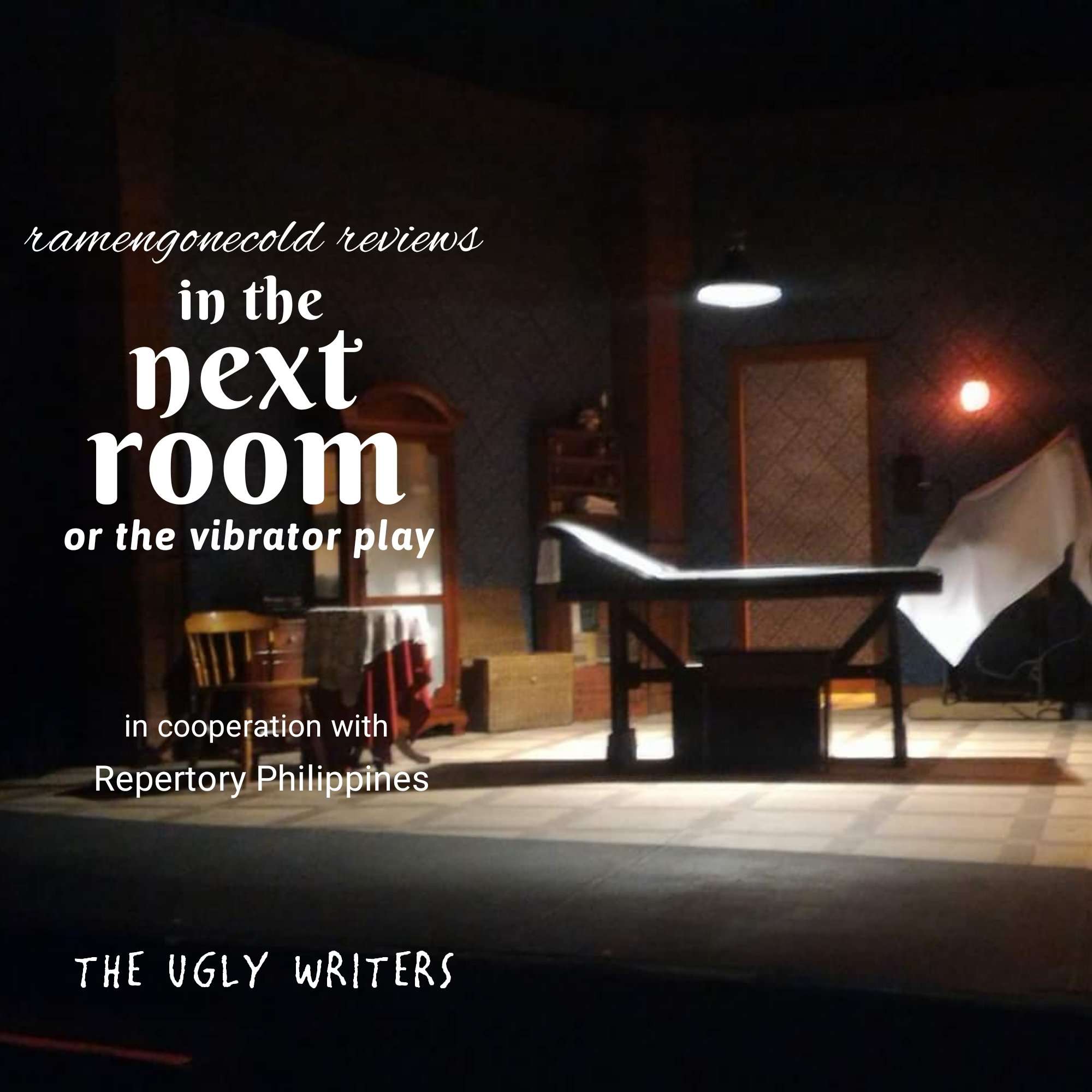 "You left me standing still, hence I have gone cold upon your return." ramengonecold is the proud lucky thirteenth member of The Ugly Writers, struggling to write about love and anything that can get everyone high. Will pen any situation and state of mind as they occur. Blunt and straightforward but benevolent nonetheless. INTJ. Leonine. Turophile. Sapporo-style ramen fan. An Oxford comma user with no regrets.
Articles: 12