Can freedom ever be for all? How do you save a nation from tyranny?

When the King of Bennvika dies in suspicious circumstances and a foreign usurper named Jostan Kazabrus seizes the throne, ruthlessly imposing his will on the population, a disunited triumvirate of leaders and their followers must attempt to resist him.

The first is Silrith, the ousted philanthropic Princess who had been expected to take the throne. The second is Ezrina, a vengeful rebel who is desperate to overturn the years of ethnic oppression of her people, the Hentani. The third is Zethun, a minor noble who believes the only way to fight for the common people is to abolish the monarchy altogether.

As the various factions fight the threat of tyranny and religious persecution, each must be prepared to make the ultimate sacrifice for their cause.

P.J.Berman has always been a fan of military themed fiction, be it fantasy or historical. Even when he was a child, he was avidly reading the works of J.Eldridge, following a range of characters in their various theatres of war throughout the dark years of 1939-45.

As he grew older, he discovered other authors, and developed a love of books that followed the lives of soldiers in different settings, especially those set against medieval, ancient or similarly themed fantasy backdrops.

He says it is because soldiers make for such interesting characters. Professional soldiers go into their chosen career for a whole host of reasons. Yet, for the most part, they fight so that others may live in peace, even though many of them may never know peace themselves unless they are lucky enough to see out their years of duty and retire unscathed. Additionally, in times of real hardship you have the soldiers of circumstance – people from all walks of life who take up arms because failing to do so could lead to them losing everything they hold dear.

Then you have the added factor of allies. Some of these may be long term and might genuinely be fighting to achieve the same outcome, but at other times they might be forced together, and simply be doing what they need to do to survive.
In Vengeance of Hope, Silrith Alfwyn must rely on soldiers of all these forms when they come together to fight under her banner, the prancing stallion of the House of Alfwyn. She stands for freedom and equality, but ultimately she and her followers are fighting simply to survive.

The complexities and chaos of war have always fascinated Berman, and the variety of characters who are forced together in these desperate situations are a major factor in this. That is of course very much the case with the characters of the authors who have influenced him. He has had endless enjoyment reading about the rigorous life in the legions for Cato and Macro from the work of Simon Scarrow, the desperate adventures faced by Thorn, Brand, Yarvi and their comrades in the work of Joe Abercrombie, to the lonely weight of extreme expectation placed on the shoulders of Babur, Humayun and the other Mughal Emperors who take centre stage in the works of Alex Rutherford. The bonds you feel with these fantastic characters are everything when you ride and sail with them, cheering them on as they face their enemies as well as their personal demons.

It is Berman’s hope that people will feel the same when reading Vengeance of Hope.

On the subject of inspiration, music is also a factor in this for Berman. The sorrow and violence of Hans Zimmer’s ‘Gladiator’ score, the crushing violence of Two Steps From Hell’s cleverly named ‘Cannon in D Minor’ and the opulent majesty of Audiomachine’s ‘Army of Kings’ have all been part of the soundtrack to the creation of Vengeance of Hope. So many times ideas have come to him while he have been listening to music by these great artists. At the moment, however, he usually works in silence, as these days he mostly only gets to write once he’s managed to put his baby daughter to sleep, when even a peep can threaten to wake her! Whoever said ‘sleeping like a baby’ has not met his daughter! Still, he often has music from one of these artists swirling around in his head while he’s typing away.
So, now you know a little more about his interests and influences, as well as his little girl’s sleeping habits! Berman hopes this provides some insight into where he draws his inspirations from and that when you read Vengeance of Hope you will meet complex characters that feel real to you, that you become embroiled in the intricate and bloody battles and that you are swept up in the political treachery that fills the pages of this first instalment of this new series. Enjoy! 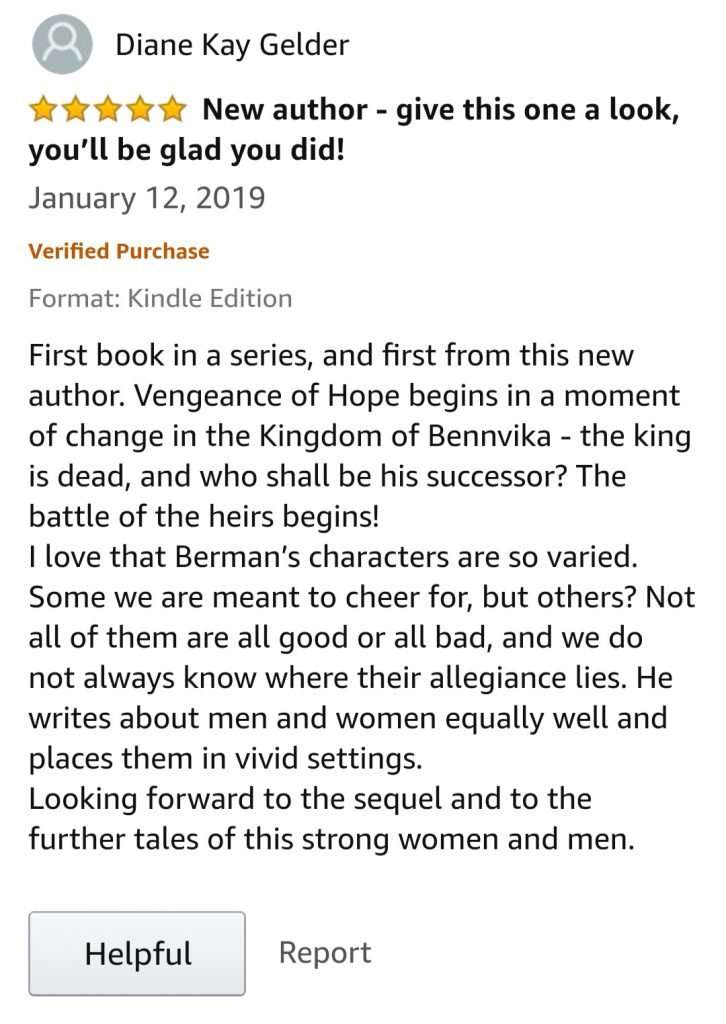 Vengeance of Hope by P. J. Berman is available on Amazon. Click the following links below to get a copy today! 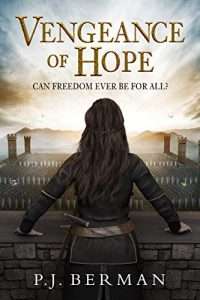 About the author: Words from P. J. Berman

I am a stay-at-home househusband living in Carmarthenshire, South Wales, although I’m originally from Hertfordshire, England. When I finally manage to get my baby daughter to sleep, I spend my time writing.

I first dabbled in writing in 2010, when I began writing short stories. I still have those stories now. The first one was set at the Battle of Marathon, and that military theme is one that has recurred through my writing ever since.

After writing a number of short stories, by early 2013 I felt ready to try my hand at writing a novel. I look back at those first few scenes and they are unrecognizable now, mostly because of the number of times I started over from scratch. Yet, at the end of 2018, that perseverance culminated in the publication of my first novel, Vengeance of Hope, the first in a series. The second installment, King of the Republic, is due for release in 2019.

Writing is something where you learn as you go, and the learning never stops. One of the first things I learned was how to take constructive criticism. Listening to people’s opinions when you are developing a piece of work is crucial.

I also learned the value of reading as much as you can while you write. Of course I already read a lot before, and working in a library at the time certainly helped with that, but once you have begun to write a novel and experienced the creation process, that part of you is still with you when you read. You can’t help but draw techniques from the writing of more experienced authors.

I have mentioned that my work has a very military theme, so it shouldn’t come as a surprise then that I am a big fan of the likes of Simon Scarrow, Ben Kane, Alex Rutherford and Joe Abercrombie. All of these great writers are experts at creating the drama and chaos of battle. Yet they all manage to balance that out by creating unforgettable, compelling characters who you can’t help but care for.

I am so excited to be able to share Vengeance of Hope with you all, and to bring to life the violent, dangerous world of intrigue and corruption that Silrith Alfwyn and her comrades are unlucky enough to inhabit.