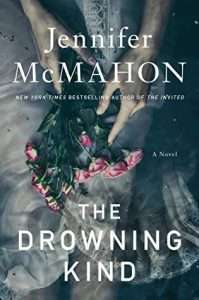 In the midst of a global pandemic, I as a writer appreciate that books are still being written, published and released. Those in love with the written word often feel that a bookshelf or nightstand that is overflowing may be the greatest problem one would ever experience. I have to admit, I feel the same way. Yes, most of the books in my home have remained unread. But I also have no issue with purchasing more online or at the local library sale because I feel that I will always need more.

On April 6th, 2021, Bear Pond Books of Montpelier, VT proudly hosted a Book Release Celebration via Zoom for Jennifer McMahon for her newly released book “The Drowning Kind”. Thrilled to participate as a fan of her work, I was also very impressed with how the evening was structured. Once registered for the event, questions could be submitted to be answered during the Zoom.

Approximately 65 people from around the U.S. logged on to enjoy an evening well spent with Jennifer McMahon. An impressive 12 books that have been published in the last 14 years, Jennifer is on track to publish a book per year for the foreseeable future. Mostly writing creepy, paranormal, suspenseful mysteries with ghoulish and monstrous undertones, McMahon has captured the hearts of fans throughout the globe. Some of her most popular books to date are “The Winter People”, “The Uninvited”, “Don’t Breathe a Word”, and “Burn Town”. Her unique ability to weave a story through families and decades enables readers to explore different settings and times they may have never had the chance to experience before.

Understanding that the places we live and visit and even the things that we touch and see leave an imprint on us, McMahon uses every interaction as a possible story that can be told. She has found that cemeteries and phone books can be a wonderful inspiration for names and story creation and that water plays an active role in her storytelling. While she doesn’t consider herself a planner as she jumps into writing each new story, she does work heavily on character development throughout. Sometimes when asked what she is writing, she finds herself replying, “I don’t know, but it is fine.” Almost as if she is attempting to reassure herself.

While admitting that she never had thought of narrating her own audiobooks, many commented that her voice was incredibly soothing as she finished reading two amazing excerpts from “The Drowning Kind”. Released the same day, I adored listening to the creepy, hair raising selections that she read aloud. Samantha from Bear Pond Books reviewed all of the questions that had been submitted and then opened the chat function of Zoom for additional questions.

McMahon identified Del as her favorite character from “Promise Not to Tell”. When asked if she has ever considered writing a sequel to any of her books, she said no, because she feels that she has even put some of her characters through too much, and that continuing their story would take away from the original experience. She said she rarely judges a book by its cover, however she will judge a book from the first few pages. McMahon wants a book to capture her attention immediately as she views herself as an impatient reader. Identifying Shirley Jackson as one of her favorite authors, Jennifer explained she often goes back to read “The Haunting of Hill House” and “We Have Always Lived In a Castle” again and again. She also adores “Mongrels” by Stephen Graham Jones and everything creepy from Paul Tremblay.

McMahon studied poetry as an undergrad and has worked with the homeless, in mental healthcare, and also done farm work. She explained that she always did a little of this and a little of that so that she could continue to write. While not acknowledging that she has a celebratory ritual when a new book is completed, she talked about the fact that she usually has multiple books she is working on. Because she is in the habit of writing every day, she tries to pick one up right away and dive in. She loves the heft and weight of a hardcover book and releases all of her books as such, and then about a year after the release, the paperback is published.

While she feels all of her books could be turned into movies, she stated that “The Winter People” was the most appealing to her to be developed into a screenplay. Many of her books span over time, which could make casting and story telling tricky as many go back and forth from the past to current day.

When asked what she is working on now, she spoke of a first draft that was recently turned in. Using her own grandmother who was a psychiatrist as inspiration, McMahon’s new book is set in 1978 and explores the concept of monsters and monstrosities on the grounds of a psychiatric hospital. I, for one, can not wait to devour each new book of Jennifer McMahon’s.

While working and going to school at home, shopping online and finding new ways to connect with family and friends, I am thrilled that activities and celebrations can also be held online and still bring a community with common interests together, if not in person. I look forward to many more evenings such as this which I view as a highlight of my month.