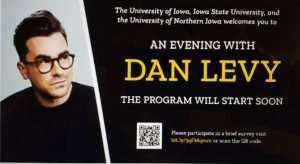 An Evening With Dan Levy

The University of Iowa Lecture Series proudly hosted An Evening With Dan Levy via Zoom on Friday evening, April 9th, 2021. Advertised as a free offering online, 96,000 people expressed interest prior to the event. The servers crashed throughout the first 15 minutes, which not only delayed the evening but left many Lecture Series hopefuls discouraged and unable to tune in. During this global pandemic, most of us have become accustomed to logging on and participating in events online, rather than in person. Once the technical issues were solved, the evening was moderated by three University of Iowa, Iowa State University, and the University of Northern Iowa students. One from each school assisted with overseeing an hour long discussion with Dan Levy, the Emmy and Golden Globe-winning writer, actor, director and producer.

Best known for his role in Schitt’s Creek, which he co-created with his father, Eugene Levy, it has become one of the most loved shows on television and one of the most streamed on Netflix and other viewing platforms. Nine Emmys were awarded for the sixth and final season, making Schitt’s Creek the most awarded comedy series in a single year. SC holds records for being the first comedy or drama series to sweep all four acting categories and received the most wins for a comedy series in the final season. Dan and Eugene are also the first father-son pair to win Emmys in the same year and Levy tied the record for most wins by an individual in a single season with four total wins.

When Schitt’s Creek was originally pitched, every American Network turned it down. He believed that slow and steady would win the race and they persisted. Not only was the show then picked up by POP, it became an instant hit once it started airing. Levy explained that his goal as a writer on the show was to help each actor develop their talents by using the role that they played. To stretch and grow each character as they developed as a person individually and with those around them. Once Netflix optioned streaming on the multi-billion dollar platform, Levy felt that was what enabled the show to be available into all homes and made it a show-stopping success.

Believing that small towns have never been portrayed as culturally aware, he and the other writers wanted to make Schitt’s Creek a safe haven for the Rose family to realize that they had nothing left but family and friends, and that it was enough. (The Rose Family lost everything including their homes, cars and all they owned.) The idea that if bigotry, homophobia and other prejudices were removed, the world would be a gentler place. Even though SC isn’t a real location, the goal was to enable the viewer to sit back and enjoy, even hold a mirror up to the life they live, and maybe even learn how to encourage and support other people who are different from them. Levy also wanted to see a love story blossom that wasn’t met with tragedy. He wanted to see a relationship as important as Ross and Rachel on the hit TV show Friends. Dan went on to explain that the last episode of season six is the clearest representation of the show. Above all else, Levy stated the most important things are love, family relationships, people growing in a healthy environment and discovering what can happen when we really encourage each other. He loves that he, his father and sister have all grown as actors and writers because of the show. They also created an even tighter familial bond.

While Levy has starred in a number of movies and started his career on MTV Canada, he explains that he will continue acting and writing for as long as he can. He laughed when he recounted people recognizing him in his hometown of Toronto. At first, he felt very confused and wasn’t sure if they thought he was someone else.

Levy openly spoke of his struggles growing up with anxiety and not feeling like he fit in. He explained that his parents were always very helpful and encouraging and he felt that as an adult, he needed to seek help and then share his story about anxiety and mental health challenges. Dan still acknowledges how tough it can be each and every day and feels fortunate to have a wonderful support system. He was also able to use the tools he was given to have the ability and strength to change how he was thinking and what he was doing. He reminded all of us to frequently check in with family and friends and to not be afraid to have the hard conversations. Dan dreams of a world where mental health challenges are de-stigmatize and everyone would be able to openly share what they are struggling with. He believes there is power in talking and even in admitting that you don’t have it all together.

Dan finds that people in the business take him seriously as a creator now and that it has been a very noticeable shift. Because peers and executives now seek him out, it enables him to lift up friends and colleagues who are still up and coming and he loves being able to collaborate.

“Success isn’t success if you can’t share it with people. In entertainment, people are very focused on themselves. If you don’t use the success that comes to you for the greater good, it is pointless.” Levy explained.

When asked what made him feel like he had finally succeeded, Levy said it was when he didn’t feel the need to compare himself with anyone else. Others just succeed differently. Levy created DL Eyewear nine years ago when he left MTV. He had always loved designer glasses, but couldn’t justify telling young kids to spend tons of money on glasses. Wanting to be an entrepreneur and own his own business, he worked on a business model so that he could put out a collection of eyewear that he loved and that was within a price point that people could buy and collect. After building the business for four years, Schitt’s Creek became a reality, and he knew he couldn’t do both and took a step back. Knowing that quality over quantity was most important, he put DL Eyewear on hold 5 years and then brought it back. Now with a great team on board, Dan loves being able to share this experience and success with others. It also enables other small businesses the chance to succeed.

When asked what he is working on, Levy explained that he recently finished writing his first screenplay. He relied heavily on the internet to guide him in how to even do that. ‘Save the Cat’ is an exceptional screenwriting guide that helped him write what he believes is a great script. Each step is laid out and provides structure so that you can fill 90 to 100 pages of a script. He loosely followed it, but also knows the importance of acknowledging when he needs to bring someone in who can help hold him accountable and help him through the process. Levy emphasized that it is important to know your comfort zone and when to reach out and ask for help or to enlist a partner.

In his closing comments, he stated that he hopes for a world where people can be kind to one another, both socially and professionally. He advised people to be very aware of others around you and he hopes this past year has enabled people to be compassionate and kind to their neighbors. Professionally, he said firmly- “If you want it, go get it. If you want to see it created, do it. Think of how many people don’t follow through. Write it, make it, create it. Even if no one wants to read it, you still wrote it and you are improving your skills each time you write. Just keep pursuing your goals. Follow through. Every time.”

After watching all 6 seasons of Schitt’s Creek last summer with my husband and participating in this event, I could have listened to Dan Levy talk all night. He was funny, poignant and inspiring. I am so very glad that opportunities such as this are available while we may not be able to attend in person. Check out your local schools, colleges and universities, so that you, too, can participate in future Lecture Series Events that will continue being available for the foreseeable future.