The Burial of King Henry VIII is a poem written by Haniya Usmani and shared with The Ugly Writers for the month of June.

The Burial of King Henry VIII 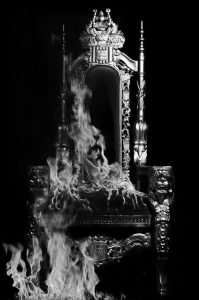 Not a drum was heard, not a funeral note to be seen,

Gazing on King Henry’s corpse did we stand,

Not a solider stood saluting, as his farewell shot,

Satisfied faces stood there, no rose in the hand.

The king is leaving, what shall we do without,

Screamed a lad stuffed in his tad armor.

Not any dared to look up, what a sight, pitiful it was.

The king is leaving, what shall we do without, he chanted eft.

The corpse, we buried in the darkly of the dead night.

No useless coffin enclosed his soma

Not a dressing on his tender wound.

Tawny sheet he lay only encased in,

With his martial clock plated on his chest.

Slowly and gently we laid him down,

All this worldly glory behind he left was nevermore.

We carved not a line, and we shall raise not a stone o’er,

For he was our king, but not anymore.

Few short prayers we all said,

And we uttered not a word of sorrow more,

But as we staunchly gazed on the face that was dead,

And we thought of nothing, but alas freedom for all.