Helping or Enabling is an editorial piece written by Mhey Espiritu and shared with The Ugly Writers for the month of July.

Filipinos are known to be resilient with everything that comes their way. A hopeful attitude that sets us from the rest of the world. Yet, there is one more that we are well-known, our ability to extend a helping hand. As the pandemic continuous to stride, March of this year was again difficult to many of our countrymen as we are asked to undergo another lockdown and still on it. This caused many troubles to the working class, especially those working under non-essential goods as they were forced to close down. Leaving a lot of Filipinos inept to sustain their basic needs every day. As the government’s budget is ceasing, the response was sluggish and was unable to immediately provide for the people. Hence, many grievances and protests arise. One, turned her complaint into action to help her community as she established a present-day “Bayanihan”, the community pantry.

A girl commenced the community pantry last April 14th in Maginhawa Street, Quezon City. A community pantry is a system where donors voluntarily provide the goods, while those who are in need would be able to get and benefit from it. The goods are in the form of food supply to which people can get what is essential for them at the moment. An action that aided a lot of people from her community. However, she emphasized that though the idea came from her, it was a group effort of the people from the community to be able to make it happen. Thus, she takes regards of everyone who has helped as well. As she would like to spread goodwill to the public, she then posted to social media her accomplishment. The idea of the concept is it easy was replicated by people in other communities.  In a matter of days, there were countless community pantries established concentrated in areas to which affected the lockdown the most. However, any positive undertaking, especially when it becomes known would set up a negative reaction not only from the public’s eye but also from our government. She was then red-tagged because of the long queue of her community pantry, to which was claimed by uniformed officials an act of recruitment of new people’s army. Her age, her will, and where she graduated from which is a stronghold of activism were also considered for being marked. She was also asked to provide for a permit to continue on with her community pantry as it defies one of the most essential rules in the lockdown which is social distancing. It came to light when the local government took upon themselves that no permit is needed, especially if the intention was to provide for the needy. The community pantry was then re-opened in April 21st. Thus, the news spread like wildfire, creating more community pantries everywhere.

The community pantries are really of great help. It would mean that we ourselves can take initiative in aiding each and every one. But, much to our dismay, it has been tapped by opportunists. First, it became an opportunity of certain individuals to be greedy. There had been news that people would get more than what they need, and would get based on their heart’s content. Second, we can be lazy and idle, especially if there are several available help to go around with. Instead, it became more of enabling others rather than helping them. Third, the sincerity becomes questionable. The intention of the community pantry was to help and support needy people not to be subjected and ridiculed in social media. Also, if helping was the true intention, then it should not be broadcast either way. Lastly, we gave our government an opening for graft and corruption. The funds that are necessary for people to be given during the pandemic, would rather go to their own pockets, especially that there are a lot of regular citizens who are willing to help other than the government.

My thoughts on this are that there are people who would step up in order to show concern for others. A community pantry has been a really good thought for those who have started and those who followed through it. However, if helping is the true nature and cause, we would need not establish a community pantry anymore. We could go just house to house and give an appropriate amount of food supply. Everyone would be given a chance to have, and at the same time, it would not defy the social distancing rule in our lockdown. Also, helping is something that should be done and not expecting in return. More importantly, we should not let out triumphs be justified by our postings in social media, because any good intentions are stained if we seek popularity and approval from others.

Give some love to Mhey Espiritu by reading her previous works at The Ugly Writers. 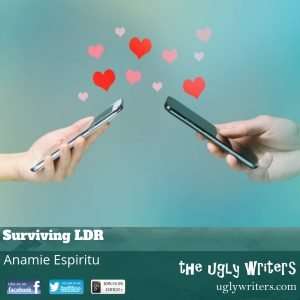 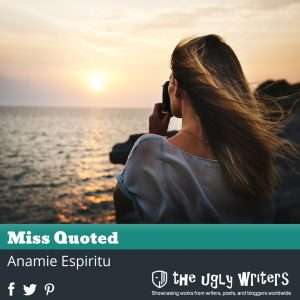