When you are surrounded by classical singers in the family while you are growing up, people expect you to end up just like them. You tend to be swallowed by the endless vocalizations and breathing techniques just to reach the highest notes.

Well, not for this young lady Mimai!

Michelle Clarisse Esguerra Adriano, or simply Mimai, was born into a family of classical royalties. Her grandmother is a coloratura soprano while her father, aunt and uncle were part of the DLSU chorale when they were younger. Mimai got into the performing arts as early as 7 years old with ballet and piano lessons. In high school, she became a part of the Glee Club and Dance Club in an exclusive all-girls school. This is also where she further honed her artistic prowess by writing scripts and performing for theatre productions in school. When we talk of theatre, she was into Shakespeare and all, heavy, intense and never light.  Indeed, there is no other route Mimai was expected to tread but go classical too. Or so everyone thought.

“SAVE ME FROM THE NOTHING I’VE BECOME…” Evanescence

Mimai, like any young individual, was hungry for her own identity, something which she would grasp as her own, not because it was jus sanguine but because it was who she is. She wanted to create a different Mimai persona and this is where she found it…

Pink. Avril Lavigne. Evanescence. Alanis Morissette. Sevendust. Pearl Jam. Metallica. Incubus. Korn. Paramore. These pop and rock icons brought Mimai to life. Yes, they “called her name and saved her from the dark!” Her 5-year stint with the De La Salle University Pops Orchestra as a vocalist from 2004-2009 opened her eyes, mind and heart to the pop rock genre. She found it fits her like second skin. As she sang Evanescence’s “Bring Me To Life” and “My Immortal” with the orchestra, she uncovered her personality and style. Simultaneously, her being a part of a pop orchestra led her to delve into the pop genre as well, belting out Beyonce’s “Listen,” Whitney Houston’s “I Have Nothing,” and Jennifer Hudson’s “And I Am Telling You.” With her stay in the orchestra, she was able to expand her vocal range and develop her stage presence. 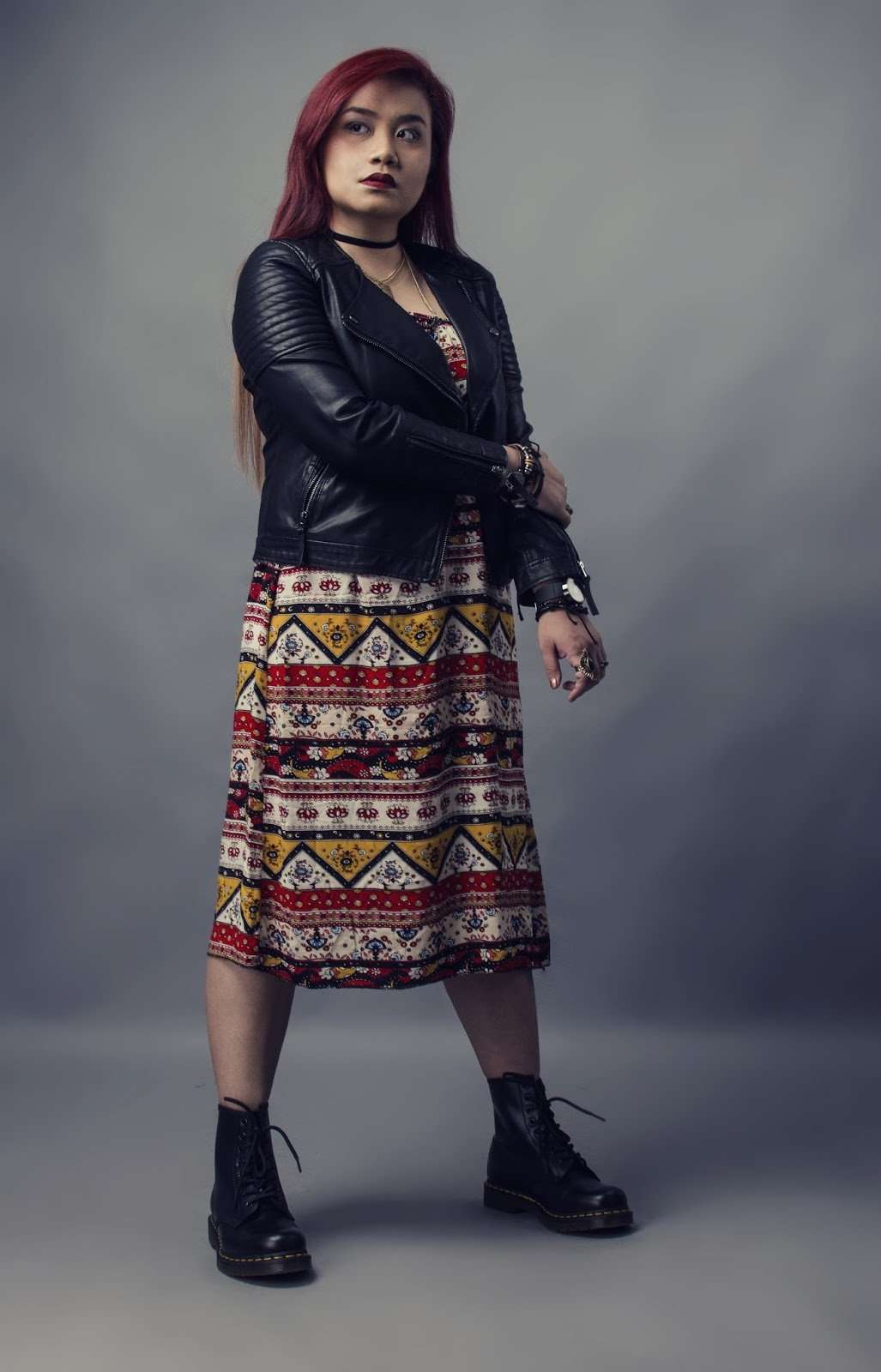 Her previous experience with theatre workshops with Trumpets from 2000-2009 landed her in Theater Down South (TDS) under the directorship of renowned director Michael Williams. Here, she became a part of productions like Treasure Island, The Princess and the Red Carp as well as the Midsummer Night’s Dream. In 2010 to 2012, she also tried vocal and stage performance coaching for singers at the Center for Pop Music Philippines. At Center for Pop, she helped develop the confidence of the other aspiring singers while learning from the process too.

“These wounds won’t seem to heal. The pain is just too real. There’s just too much that time cannot erase…” Evanescence

Mimai is one person not to be taken as shallow. Her sentiments are rigged way deep down her person. Every word she utters represents a string of emotions which one will surmise is a result of personal encounters never to be forgotten.

She recounts in a conversation that she was bullied and misunderstood in high school, partly because she was deep and intense, maybe more because she was talented and artistic. Being all artistic and in tune with her emotions may have been weird for some girls that they gave Mimai a hard time. For all that she experienced, Mimai wanted acceptance and understanding. While her experiences were deeply carved into her being, she never thought of getting even or fighting back with anger. All she wanted was to be understood and accepted for who she is.

This is also the reason why, in her desire for understanding, Mimai took up Psychology for her Bachelor of Arts Degree and Clinical Psychology for her Master of Science Degree. According to her, apart from her own experiences, this is where she gets most of the inspiration and emotions she has poured into her singing and songwriting. She found “people influences” interesting, so she starts conversations with people for them to ease up and relate to her their own stories. In her very words, “Experiences are tied up with people so I do not just remember the experiences but more the people in it.”

A leap of fate for Mimai was when she passed the audition to represent the country and compete at the World Championships of Performing Arts, where Jed Madela and Rhap Salazar, among others, launched their careers in the industry. She underwent rigorous vocal training in preparation for the competition. She held her first solo concert in January 2016 entitled “Fly” and a second solo concert in June 2016 entitled “Send Off” at Taste New Manila, PGHI Hotel where friends and family expressed their full support and well-wishes for the competition.

She competed at the World Championships of Performing Arts in Long Beach, California where she won 7 medals and a plaque. She won a gold medal and a plaque, among others, for being the Overall Champion and Division Winner in the Rock Category. Also, she got 2 more gold medals for the team group production with Junior New System (WCOPA Grand Champion Performer of the World 2016) and WCOPA Industry Award which is given to those they deem marketable in the USA. Four silver medals in other vocal categories including Pop and Broadway proved that Mimai is ready.

Mimai, unknown to others, is very much interested in other cultures. She taught ESL (English as a Second Language) to Koreans where she also learned basic and conversational Hangul. With this in hand, she incorporated Hangul into her music repertoire as she sometimes covers Korean songs in her gigs. To further expand her musical influences and repertoire, she is also currently learning Thai as an active response to meeting fellow WCOPA 2016 Team Thailand delegate and Thai superstar Keng Tachaya (The Voice Thailand) in Long Beach, California, fostering a close friendship with him and meeting him again in Bangkok, Thailand. Mimai’s love for travel, culture and learning pushes her to expand her artistry by incorporating what she can to her personal style.

Having won Overall Champion for the Rock Vocal Category, she finally realized who she is as an artist and redefined her niche as a performer. Her WCOPA experience reinforced her persona as an artist.  Mimai has just recorded her first single “Alam Kong Hindi Ako” which was written and produced by fellow WCOPA 2016 delegate, singer-songwriter Garth Garcia of Star Music.

With all these outpour of blessings and capture of a new identity, Mimai will be launched, together with her digital single, as a pop rock performer in Mimai Reborn: Pop Rock Diva Unleashed on November 18, 2016 at Historia in Sgt. Esguerra, Quezon City. She will be joined by fellow WCOPA 2016 delegate and Star Music artist, Garth Garcia.

”I’ve been sleeping a thousand years, it seems. Got to open my eyes to everything…bring me to life!”

Now, as Mimai is Reborn, she has a full life ahead of her, clutching with her, not just her personal experiences, but those of everyone who has touched her life and kept her eyes open for music and song inspirations.

Check out another article about the lady here.