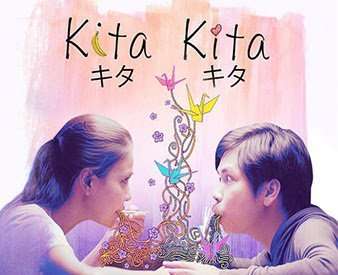 Last July 22, 2017 Me and my friends went to Eastwood to watch the movie Kita Kita, we were excited to watch this because of Sapporo Japan, and yes, also because the actors in this movie was the most unlikely and most unusual pairing I have ever seen. Because Empoy Marquez and Alessandra De Rossi?? sino magaakala na sila ay magiging love team, Alempoy FTW. It is not your typical rom-com movie. The movie was directed by Sigrid Bernardo and was produced by none other than Piolo Pascual and Bb. Joyce Bernal.

The story revolves around Lea who works in Japan and has temporarily lost her vision due to stress. Here comes Tonyo who reaches out everyday with food just for Lea to notice him. Eventually, they became close and has developed something for each other. And the rest of course you have to watch it for yourself.  I love the movie and because I am such a crybaby I laughed and cried at the same time, for me that’s how good it is. The laughter from the movie goers was just authentic, even the actors themselves would attest to that. It is so whimsical in a way that it is delightful and easy to watch. I rarely watch tagalog movies but this one makes the cut. Masakit ng tyan ko kakatawa, masakit pa ang mata at puso ko sa kakaiyak. Kasi di ba mabuti pa yung saging may puso. At yung puso sya lang yung may saging.

It is better to feel than to see. This is what this movie implies. Though the story is at its simplest, it has touched the heart of those who watched it. Despite having 2 actors only, Alessandra and Empoy were very effective in their roles as Lea and Tonyo – acting while not acting.

Ordinary things were given importance and will never be seen the same way again.

8.      Pagluluto ng adobo at sinigang. The way to the woman’s heart is through his stomach (Yan talaga yung gustong sabihin ni Tonyo)

Binibining `E works for a BPO company by day and is a supersized, weird and peculiar super hero by night who loves the sea, the sand and the sun. She has been eating books for breakfast, lunch and dinner and even for desserts too. An amateur sketcher, can draw when bored. Can write at times and whenever she thinks she can. A certified bibliophile, expect lots of book reviews and adventures with this ugly writer. She is not an ordinary girl. She is peculiar indeed. Will prefer basketball over drama, books over telenovelas, a good book and a cup of coffee over tv.
Articles: 98