Another corrupt official has been released yet there are hundreds rotting in jail for petty crimes (it is not to say that we should free up petty criminals like how our justice system forgave the likes of Revilla et al). This is the kind of world we’re living in. We were promised that change is coming. 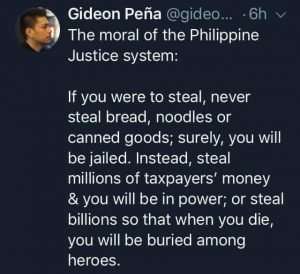 This is the change we deserved. We deserve every scum in the government by being scums ourselves.

We’ve always had corrupt officials. That is the sad truth about living in the Philippines. And it won’t be any different in the future. Why and how did we end up with such a dilemma to the point that during elections, “smart” voters have no other choice but to vote for the “lesser evil”?  The joke is on us as this is only the tip of the proverbial iceberg. What is alarming is that the society has turned a blind eye. Have we turned desensitized? Numb? Hopeless for a better tomorrow? I won’t be surprised if Revilla, Bong Go and the rest of the merry men, will be elected (and re-elected) this coming election. Pagod na ba tayong umasa at wala na tayong pakialam kung hinahalal natin ay mga ganid?? 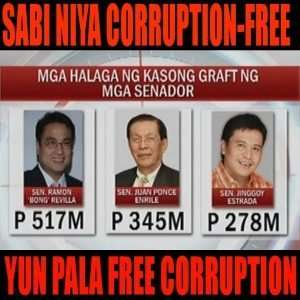 For the past few months, citizens are quick to blame the media. I guess it’s high time we start blaming ourselves. For being reckless. For being a sheep. For being gullible. We did this to ourselves. We – as in the old people who still abide by the “kamag-anak ni ano yan”, “kaprobinsya ko kasi” and “maganda kasi yan bago” mentality. Ironically, these are the same people who clamor for change yet don’t have the audacity to fall in line at the train station or practice the escalator etiquette. We – a bunch of hypocrites.

If you value your country, if you love your younger brothers and sisters, and if you care for your future kids and grandkids, please vote wisely. This isn’t just a catch phrase anymore. F*cking do it.