It was a long time ago. It was a long ways away. I was a lot younger. We were all a lot younger, and we were less mature than our age would indicate. None of us had much money, mostly we worked construction. In the winter most of us didn’t work much. But, we always found a way to kill an evening.

One of our favorite ways to kill an evening was our Sunday Night Poker game at Gene’s. Gene, Gene, the dancing machine. A nickname whose origins are lost in the murky shadows of the past. Shadows thickened by the liberal application of recreational drug use. It was all in good fun. There was nothing serious. Nothing we did was serious. Nothing we did had any real value to society which was ok with us.

Our Sunday Night Poker game was a perfect example of our casual indifference. It was “dealer’s choice.” The dealer could call any game he wanted. Additionally, he could add wild cards. Sometimes, after a few beers, and maybe the ceremonial passing of the herb, somebody would call one-eyed jacks and deuces wild. This meant that two of the jacks and all of the twos could be used as any card. This made it possible for two people to hold four aces. Or three people to have three aces. Or two people to have five aces. Nothing was ever boring, or even unsurprising, in those games.

It was played for nickels, dimes and quarters. Large bets were considered impolite and frowned upon. Nobody ever won much, but nobody ever lost more than they could afford. More important, nobody ever walked away angry. Sometimes, if a player ran out of money before the night was exhausted anybody who was winning would “loan” a few dollars, and I don’t remember anybody ever asking for any of it back. Unless the luck changed and the winner became the loser. We might as well just have pooled our money and divided it up to start.

It was never about the money. It was always about wasting time with good friends. Competition is a wonderful thing, but it has no place in a social setting. Bragging, boasting, insults and artificial displays of ego were encouraged. Nobody ever sounded so superior after winning $1.25. Nobody was ever so indignant for dropping 45 cents. It was part of the game.

Now, I am closing in on retirement. I have held the same job for over twenty years. And most days I take life too seriously. Aching feet, a stiff, sore back and arthritic knees only allow for so much frivolity. Somehow, over the years, I have managed to stay in touch with Gene. He is the only person from the old country (Nebraska) that I talk to. And when we talk, we often reminisce about those games. The goofy, good-natured, foolishness.

Somehow I really think I am a better person for the stupidity. Somehow it seems that if you don’t let your hair down once in a while and just give in to silliness you can never understand life. If you don’t laugh at reality, reality will laugh at you. 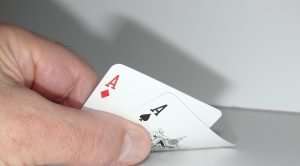 Support Tim Clark by visiting his other write-ups here at The Ugly Writers of check his very own website here.