There were days when I had nothing to eat. I lived off on cigarettes, coffee, and drinking at Palma Hall’s water fountain. No one back then understood my decision to leave home. I had everything an 18-year-old girl could have ever wanted. I drove my own car and my allowance for a week was more than the monthly minimum wage but I didn’t have freedom. I had been living a lie since pre-school as I grew up based on everyone’s expectations. I had no clue as to who I really was and all the academic accolades I’ve received couldn’t translate into giving me a sense of identity.

One day, I snapped. I left all my material possessions and with only Php 500 in my pocket, I decided to leave everything I was accustomed to. Saying that this experience was difficult is an understatement. I was a spoiled brat who grew up in a different country so I had no street smarts that I could rely on. Heck, I didn’t even know how to get across if a pedestrian lane wasn’t present. I had nowhere to live so the University’s main library became my new hangout spot. At closing time,I would sleep at the benches hidden from sight, hoping I wouldn’t get murdered. I would go to my classes hungry. My so-called friends, who were also my blockmates, didn’t even bother to ask how I was doing even if they all knew what I was going through.

I was desperate but I didn’t cry, I hustled. From being a thesis writer for students of nearby colleges to a part-time researcher of a government institution (thanks to the recommendation of one of my professors), I made ends meet. A semester before graduation, I even had a stint working for a bar in Timog. I have no talent in dancing whatsoever but I could talk about anything. I knew the owner so at any point in time that someone asked for services I don’t give, I could get the bouncer to show them their way out. I learned how to cook (fry is the operative word) and to do my own laundry. Overall, I learned what I was capable of in addition to finally understanding the value of money.

When I tell people this story, they always ask if I would have chosen the same path, given a chance to rewrite my life. My ready answer is that I wouldn’t have it in any other way. This wasn’t the dark ages for me, this was my renaissance. I am not ashamed of my past because it made me who I am today. I wouldn’t have known my worth as a person had I not gone through this period of extreme self-reliance and awareness.

Our circumstances do not determine who we become, we do. Do not let anyone tell you otherwise.

Read previous entries for Grateful: Something to be thankful for only here at The Ugly Writers: 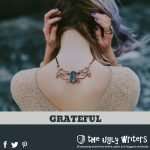 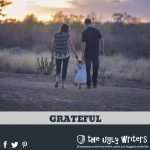 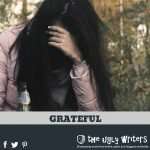