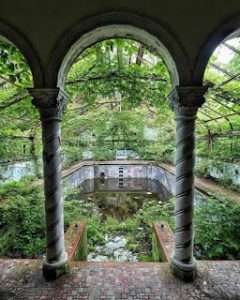 I have always loved exploring.  Whether it is a building, a forest, a mountainside, it doesn’t really matter to me.  If I haven’t been there before, I will always want to see it.  I want to walk hills I haven’t tread prior. I want to sit in the tall grasses and make braided crowns with my children.  I also want to walk where someone may have never walked before. Each adventure bears a story that should be shared.

Sometimes dirty, unsafe, and long-abandoned shanties, homes, and buildings catch my eye.  I am normally a rule follower.  But something has changed in me.  When a No Trespassing sign is posted, it is as if I throw all caution to the wind and view it now as a Challenge Accepted. I have never been caught per se, but I have been yelled at, police have been called and I have needed to pick up the speed and head back to where I came from more quickly than I had wished. It is almost as if I have lead my entire life was a law-abiding citizen, and I am now rebelling.

I wish I could draw or paint. I wish I was a talented photographer.  I want to capture the curvature of the banisters.  The panes of stained glass, few of which remain.  I want to scrub the kitchen counter clean and imagine when the last meal was prepared in that setting.  I want to capture long forgotten beauty so that others may also enjoy it before it is completely gone.

As a child, I remember standing in the doorway of a ready to fall down shanty a ways back in the woods.  Not sure whoever owned the land,  I know that many other people had already scavenged and found the last few treasures that were meant to be unearthed.  I didn’t mind that there was nothing left for the taking.  I wasn’t there, standing in that doorway, desiring to take anything from the dwelling.  I wanted to capture the stories of those that once called it home.  I wanted to know who stood where I stood.

Was there a young mother who dried her hands on her apron as she called to her children to return home for dinner?  Was there a husband who rocked on his front porch after a long day in the fields? Did a boy whittle a toy sword on those front stairs that had long collapsed so that could play with his friends? Were corn cob dolls laid in a basket to rest by a little girl before she tended to her afternoon chores after the heat of the day had passed?

These were the story snapshots that I created.  The fictitious tales that were probably very close to true events. I committed them and many more to memory as if they were stories that were shared with me.

The next summer, when I returned to the homestead, the modest two room structure had fallen to the ground.  The splintered sides of the door frame where all that stood.  The wood walls laid scattered in small piles here and there. And evidence of someone sorting through what could be salvaged was apparent. To most, it was the remnants of an abandoned fallen structure. To me, it was memories of a family home that I was never invited into but loved.

There are amazing stories everywhere we look.  And most of those stories are lost until we tell them or share them with others.

Be intentional about your storytelling.  Be overt in your explorations.  Leave the treasures behind.  But those stories?  Take those stories with you. Share them and share them often.

Give some love to Kelli J. Gavin by visiting her site here or by reading her previous entries at The Ugly Writers: