The Day I Stopped Running

That’s me. And I’m late. Early classes are my number one enemy. They make me wake up at 5am and make me endure the excruciating pain of riding public transportation during rush hour. I hate them as much as I hate flying roaches, mud, crowded places, broken promises, liars, and unmet deadlines.

I hate a lot of things, including Friday the 13th. You see, I believe in bad luck, Feng Shui, destiny, or any other fate-telling, luck-generating information. I hate Friday the 13th because it never did me any good.

When I was seven years old, I was fearless. I was learning to ride a bike back then in our neighborhood in Quezon Province, and as I was just starting to like it, I fell, face flat on the ground. It was Friday the 13th. I never rode a bike since then.

Christmas is my favorite holiday and singing is my second favorite thing to do (although it’s a one-sided relationship between me and singing… I suck at it. Big time), so when December came, me and my friends went Christmas Caroling. We stopped by at each house with our Santa hats, tambourines, and maracas, singing ‘Oh holy night’, ‘Jingle bells’, and ‘Joy to the world’.

But one of the house’s owner wasn’t feeling any joy that night—just right on cue when we sang “…and heaven and heaven and nature sing” at the top of our lungs, they released the beast—the dog, I mean—the huge black dog whose life mission was to run after us. Guess what day is that? Yup, it’s Friday the 13th. I never went Christmas Caroling since then.

I could go on and on about my misfortunes on Friday the 13th, but that can wait. My Political Science professor can’t. I went straight to my locker just outside our room to get my things before going in. I was still catching my breath when I nearly lose it again. My hands automatically went to my mouth to cover it before the air escapes. There was a blue paper bag taped on my locker door.

Unlike any other girl who receives surprise gifts from who-knows-who, my initial reaction that time was annoyed, followed by anger, then by fear—I’m already late and I can’t even open my locker because there’s a freaking paper bag taped on it. I wasn’t sure if it’s really meant for me, but since it’s blocking my locker, I snatched it off, tearing the sides of the bag slightly, and got my things inside.

I noticed my name was sloppily written in black pen on the bag’s tag. All the more right I have to tear the bag apart from my locker, I thought.

It wasn’t my birthday. It’s more than a month early to be a birthday gift. My High School friends, who are most likely to give me surprise presents, weren’t aware I have a locker, plus, they can’t just trespass in my school… so, I couldn’t think of anyone who will give me this or any reason to receive this. But I opened it anyway.

It revealed an envelope and a purple stuffed bear with pink ribbons tied on its neck. A tag was hanging on its ears that said, “Hi, my name is Wanda.” In spite of the many things I hate, I still like and love a lot of other things. And although I didn’t know from whom Wanda came, I already loved her. She has the same name as the pink-haired fairy in Fairly Odd Parents. And it has pink ribbons! Who wouldn’t love pink ribbons?!

In the movies, the leading lady is supposed to look for a card or a note that would reveal the person who gave her things such as this. I did the same. I opened the white envelope and read the card. Honestly, I was afraid to know who it was. I was afraid to know if it was a prank or a mistake. I covered the name of the sender with my four fingers, my thumb behind the card acting as support. I slowly, carefully, with one eye closed, removed my fingers. Then I was, again, annoyed.

“In between the nose and lips”

That was what’s written. I thought it’s silly to have “in between the nose and lips” as a code name because it’s damn long… and it’s lame. He could’ve just used ‘Philtrum’, but then again, it’s also lame. Still, I had to give him credit. I liked the whole gesture, anyway. Surprises always made me swoon.

Days, months, passed, ‘In between the nose and lips’ became my favorite person. Let’s name him, Z. Z kept on surprising me from the smallest to the biggest of things. I didn’t really care about the gifts. But every day I looked forward to his sloppy, cursive, hand-written letters. He sometimes tape it on my locker door or slips it right inside.

Some are just simple one-liners, some are lengthy, some are lines from songs, and some are poems he made. Reading his letters made me wonder how this person knew me so much. I’m a sucker for written or spoken poetry and he seemed to know it even before I tell him. I get shaky-panicky-nervous an hour before any presentation in class, so he’ll call, assuring everything will be just fine. It seemed like he knew how I feel before I say anything, what I want before I even want it, what I love before I even start loving it.

Z was the kind of person I didn’t pray for because I didn’t think I needed someone like him. I never asked for him, but honestly, I wouldn’t ask for someone else aside from him, either. He became my reason for waking up at 5am and not complain about it.

Z was perfect… too perfect that it made me wonder how far will this perfection go?

Then one night, I got the answer. Everything was snatched away from me. As unexpected and as brutal as the way I snatched the blue paper bag taped on my locker door years back—careless enough to rip me apart.

That night was a Friday. The 13th day of the month. I never loved again since then.

If you liked The Day I Stopped Running, please support other works by Lensey Etcubanas only at The Ugly Writers: 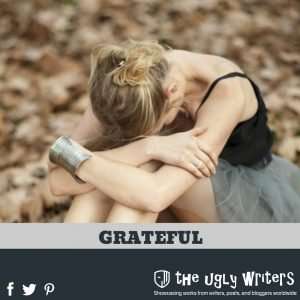 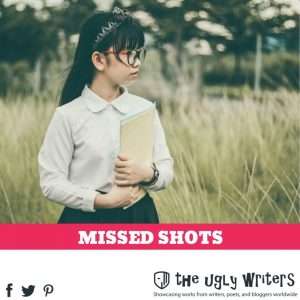