Changed Behavior is a short story written and shared by Kelli J. Gavin to The Ugly Writers for the theme Pandemic this month of April. 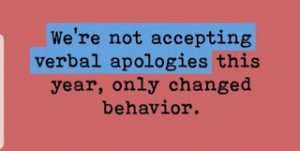 My mom used to say, “The best apology is changed behavior.”  I think she knew a little about that. Even though I am unable to attribute this quote to her originally, we will all just pretend going forward that Jo Cook was the wise woman who coined this phrase.

My mom was once asked to marry a man she didn’t love.  His name was Darrell.  She only ever thought of him as a friend and knew she would never love him in a way that would make her want to spend her life with him.  He asked her right before she was preparing to leave for trip to Hawaii.  When she told him that her answer was no, Darrell refused to drive her to airport.  She was furious but it affirmed to her that she responded appropriately.

When she returned from an amazing trip to Hawaii, she had always thought that Darrell would apologize for his behavior. My mom and Darrell crossed paths with each other frequently after that messy encounter. Darrell didn’t actually apologize for his immature behavior and for pitching a fit and leaving her without a ride to the airport until almost 20 years later when they went to the Monroe High All School Reunion.  He admitted he was wrong and that he wished he had handled himself differently in the face of rejection.

My parents were married in the February of 1969.  They separated in the fall of 1987 and divorced soon thereafter.  My dad only told my mom that he didn’t love her anymore and didn’t want to be married her.  No explanation was given other than that. He refused to go to counseling and promptly moved out. My mother was destroyed and broken.  I don’t feel she ever fully recovered.

My dad and mom really struggled being divorced and parenting two teen daughters when they couldn’t share a civil word to save their lives.  They both made life very difficult for each other and themselves. They also made life difficult for my sister and I.  While my sister and I grew up, the atmosphere became less contentious, but matchsticks continued to threaten an immediate burn whenever they spoke.  And then they were no longer forced to speak. My dad moved out of state and our mom was our full time custodial parent.

My parents didn’t see each other face to face again until I married and then my sister married in 1995 and 1996. They spoke, they were cordial and my mother received an unexpected apology. My dad told my mom that he was sorry for leaving so abruptly, for not being more involved in parenting and for not trying harder.  My mom appreciated the apology but struggled to process the meaning behind it after so many years of heartache.

My mom also had been hurt by a few people in her assisted living facility.  When she moved in, she was the youngest one there and people struggled with her larger than life personality. She wasn’t able to take care of herself any longer and needed to have help with physical care, medications and meals. She was in pain daily, was forced to give up driving and her home which she adored and was trying to learn how to adjust to living in a small, even though very nice room with a bathroom. She didn’t need the senior citizen’s form of Mean Girls to assail her in everything she did.

There was one instigator who decided that my mom wasn’t worth her time. She called her names, scoffed at her and tried to get others to join in her game of being mean. The three people hurt her so much as two of them were her friends prior. Mom became lonely and sad.  She was hurt by the words and actions of three old mean people.  The ringleader’s behavior became unbearable and my sister and I reported it more than once.  The mean behavior decreased but never ceased, until the woman was actually evicted because of how she started treating the care providers at the assisted living facility.

My mom never received an apology from the Mean Girl across the hall. But she forgave her. “You know, KC, she was a victim of elder abuse at the last facility she was at.  She has had rough life.  I feel bad for her.  Oh! And think of her poor children and the people that will have to take care of her at the next facility.  She probably treats everyone like that.  I will just pray for her. That is what she needs. Prayer.”  My mom’s example of forgiveness in the absence of an apology was an amazing example to my sister and I of how to proceed in life when we have been hurt and a situation never really is rectified.

The two people that were my mom’s friends prior finally realized the error of their ways and apologized.  It meant the world to my mom, even though she continued to be cautious in seeking other people out in new friendships.  Both the man and the woman loved my mom and attended her memorial service when she passed away in 2013.

Sometimes people apologize, and sometimes they do not. Some people are never able to humble themselves enough to recognize when they have done sometime wrong, and should even apologize in the first place.  But as my mother always said,  “The best apology is changed behavior.” Even if an apology doesn’t happen, a choice can be made to change. Then we can change how we act, what we say, how we relate to one another.  We can choose to behave differently. Better. Whether or not anyone is watching. We can choose to be kind. We can choose to do the right thing. We can choose to apologize by changing our behavior. Permanently.

This important reminder is brought to you this evening by Jo Cook.  A mom who is missed every single day.

Give some love to Kelli J. Gavin by visiting her site here or by reading her previous entries at The Ugly Writers: